Prosecutors have filed involuntary manslaughter charges against the parents of the suspect in a Michigan high school shooting that left four dead. A fugitive warrant was issued for the couple hours after charges were filed.

The charges were announced by Oakland County Prosecutor Karen McDonald on Friday. The parents of the suspect, James and Jennifer Crumbley, have each been charged with four counts of involuntary manslaughter.

“While the shooter was the one who entered the high school and pulled the trigger, there are other individuals who contributed to the events on November 30 and it’s my intention to hold them accountable as well,” McDonald said during a news conference on Friday, signaling that further legal action might follow. 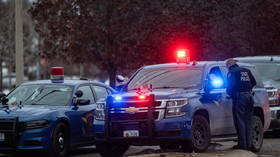 The prosecutor revealed that the suspect, Ethan Crumbley, was caught by a teacher searching online about ammunition a few days before the shooting. School officials contacted his parents, however the couple ignored the inquiry, while Jennifer texted her son “LOL I’m not mad at you. You have to learn not to get caught,” according to McDonald.

Later in the day, a fugitive warrant was issued for the couple after they failed to show up for a court arraignment.

“Their attorney had assured us that if a decision was made to charge them, she would produce them for arrest,” Oakland County Undersheriff Mike McCabe said, as quoted by local media. “Our last conversation with the attorney was that she had been trying to reach them by phone and text, and they were not responding.”

The charges against the Crumbley family are a rare move by prosecutors, as the parents of school shooters rarely face legal trouble in the US. Moreover, unlike some other states, Michigan does not have any law that requires gun owners to keep their pieces locked away from children.

McDonald, however, appeared adamant about prosecuting the parents, as she said on Thursday their actions went “far beyond negligence.” The gun, bought by James mere days before the shooting, “seems to have been just freely available to [Ethan],” the prosecutor stated.

The mass-shooting unfolded at Oxford High School, located in a northern suburb of Detroit on Tuesday. Four students were killed in the attack, while seven others were injured. The suspect, who will be tried as an adult, has been already slapped with multiple charges, ranging from first-degree murder to terrorism.