Apple has filed multiple patents which describe a method of connecting small unmanned aerial vehicles (UAVs) to various wireless controllers – and has seemingly tried to keep its research project a secret.

The US Patent and Trademark Office published two patent applications from the Silicon Valley company on Thursday. 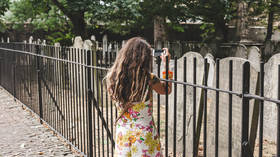 In an apparent bid to keep the project secret, Apple initially filed its patents in Singapore, according to Patently Apple, a blog that tracks the firm’s IPs. One of the patents is titled ‘Unmanned Aerial Vehicle Tracking and Control’ and was filed in Singapore in March 2020.

That document outlines “a system and method for tracking and/or controlling… UAVs in a cellular network system,” suggesting that Apple has developed a method of connecting a drone to a wireless device like an iPhone.

Website 9tomac.com, which covers Apple news, wrote that the company appears to be describing a way to have a drone “handed from one controller to another,” potentially mid-flight.

The filings could mean that the company wants to make drones that can be operated via iPhone or even gaming consoles, though Apple regularly files patents for ideas and not all of them come to fruition.

The tech giant has filed several patent applications related to drone technology over the past year, including one titled ‘EU Modem for Drones with Flight Path and 3D Wireless Environment Signal Quality Information.’