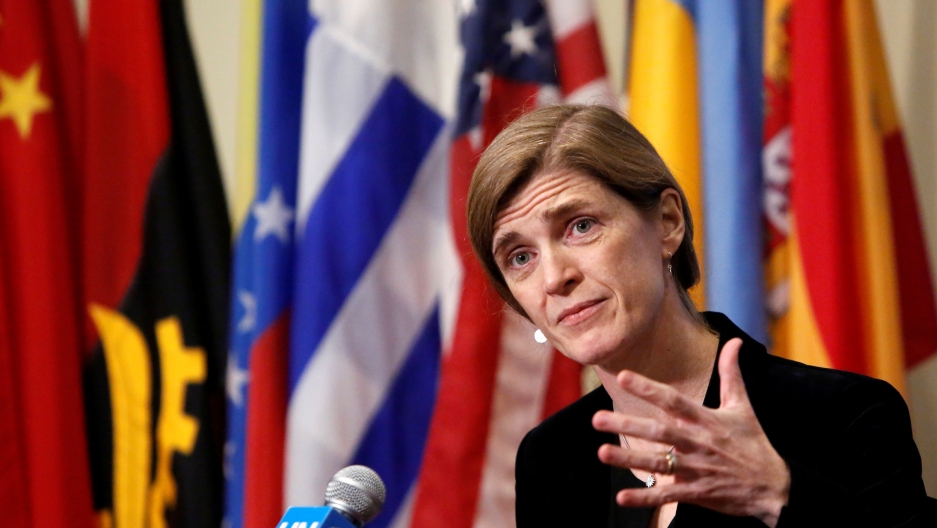 That’s a stark contrast to six years ago, when the US under former President Barack Obama worked to assemble a global coalition to fight the outbreak of the Ebola virus in West Africa.

Former US Ambassador to the United Nations Samantha Power was part of that US effort in 2014. Power describes that work in her recent memoir, “The Education of an Idealist.” During the Ebola outbreak, she says, the US collaborated with other nations to stem the spread of the outbreak at its source.

She says the coronavirus can only be tackled if wealthy nations work hand-in-hand with the developing world.

Power spoke with The World’s host Marco Werman about how lessons from that experience apply to the pandemic the globe is facing today.

COVID-19: The latest from The World

Marco Werman: Ambassador Power, you helped assemble the global coalition to combat Ebola in 2014. That was a very deadly outbreak. It took some 11,000 lives — mainly in West Africa — with just one fatality here in the US. Looking back at that time, did we just get lucky?

Samantha Power: I don’t think so.  One of the greatest professional experiences of my life was to be tapped by President Obama who said, ‘Go to the Chinese, go to the French, go to the British.’ Secretary of State John Kerry [was] doing the same. Our diplomats all around the world [were] going to governments and hustling them to try to secure resources.

And it’s just the kind of global campaign that’s needed now. Given that developed economies, of course, are having their own severe challenges and are suffering heartbreaking losses, to still, at the same time, be organizing in order to help those countries that have nowhere near the infrastructure or the resources that these developed economies have, we have to walk and chew gum at the same time. Because even if you’re only looking at it from the narrowest, most self-interested perspective, for as long as this pandemic is raging in parts of the developing world, it’s going to be very hard to restore economic normalcy globally.

So did other countries step up? I mean, what were the results of that hustle?

Absolutely. I mean, 60 to 70 countries were part of the coalition. The United States took a leadership role in the country of Liberia in West Africa. But we went to the British and said, “OK, you take Sierra Leone.” And the British stepped up in really important ways in a leadership role, backing, of course, the work of the Africans on the ground, which was the most important. The French stepped up in Guinea. Cuba — this tiny country with whom we were estranged at the time, we’ve not reopen diplomatic relations — Cuba’s incredible medical professional corps was taken advantage of and they deployed more doctors per capita to West Africa than any other country involved in the coalition. Malaysia sent rubber gloves. Japan worked on the hazmat suits to try to make them cooler.

I’m just curious, I mean, are there some legitimate concerns about China’s approach to the pandemic, as well as its transparency, that may not allow the same level of cooperation today?

I think there are more than legitimate concerns. I mean, China’s response was that of a cover-up in the earliest stages, firing whistleblowers, locking people up who tried to raise the alarm. China has a huge amount to answer to. China now, of course, is trying to rehabilitate itself in relation to this pandemic and is shipping vast supplies to particularly developing countries that don’t have those supplies on hand. But many of those supplies are defective. China does not yet really work effectively at building global coalitions around what they themselves do. China is much more interested in its brand and in bilateral assistance and not really yet in a position to or really showing much interest in leading the world.

Related: US leads in coronavirus cases, but retreats from global leadership

Pandemic security always needed to be a top-line concern. I think it was in the Obama administration, but it’s been very hard over the decades to secure adequate funding and resources. So you have heard it talked about as a core security threat, but compared to the resources deployed, for example, in fighting terrorism, it’s just night and day. I mean, since 2010, the United States has spent $180 billion a year on counterterrorism operations and just $2 billion a year on pandemic and infectious disease response infrastructure. So that gives you a sense of how much more weighted America’s understanding of national security has been toward hard security, counterterrorism, the military, than toward crises like this, which proved far more lethal when they strike.

Global cooperation is also the US reaching out when it needs help. South Korea sending half a million test kits to Maryland. It’s a move that appears to have annoyed President Trump. As this crisis continues, do you think the Trump administration will be open to receiving more international help?

Well, I think states are open because state governors and state officials are on the frontlines seeing, every day, the human consequences of the lack of stockpiles and the lack of prevention. So what you’re seeing now is everything from California to Maryland to the city of New York reaching out to whatever international partner they can find. Bill de Blasio went to the United Nations in order to get a stash of masks — tens of thousands of masks from the United Nations headquarters in the earliest stages of his pandemic. I don’t think that urgency is evident at the highest levels of the federal government, unfortunately. And I wonder if that’s just because of the remove that federal officials may feel from the frontlines where this crisis is striking so many thousands of American families. I can’t really explain it.

But what’s important is that those supplies are procured, that our frontline workers have the prophylactic provisions that they need. They’re already risking so much in service of our broader communities. And, you know, it’s admirable to see governors hustling. But it shouldn’t be necessary. We have a whole apparatus that carries out our foreign policy every day. And to the degree that we can’t make up the shortfall through national production and manufacturing, that foreign policy apparatus — which unfortunately, of course, has been gutted in large measure by the Trump administration — but that should be deployed in getting other countries to provide the kinds of supplies that we do not have on hand.

This interview has been edited and condensed for clarity.