Madeleine Albright: ‘Globalization is not a four-letter word’ 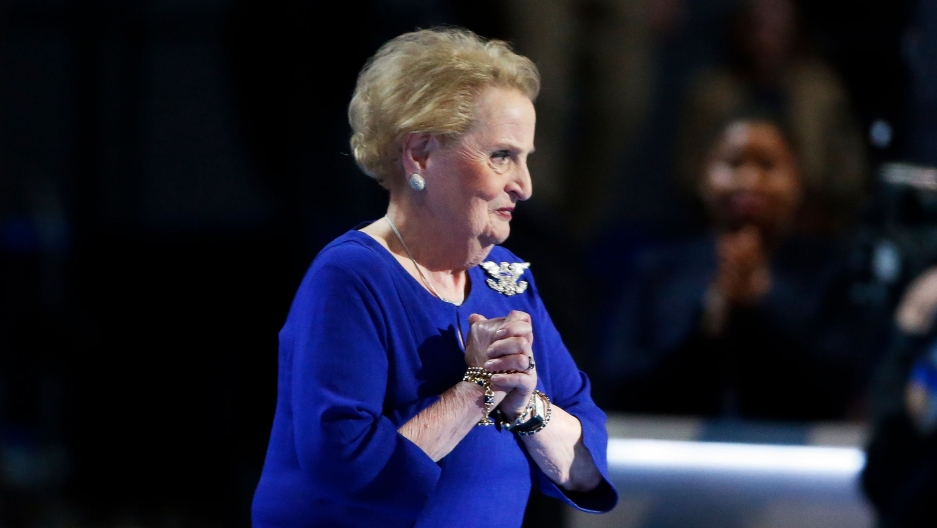 A World War II refugee from Czechoslovakia, Albright became the first woman to serve as US secretary of state in 1997, appointed to the role by then-President Bill Clinton. Before that, she served as US ambassador to the United Nations.

In her newly published book, “Hell and Other Destinations: A 21st Century Memoir,” Albright reflects on life after her tenure in the State Department. But the former Secretary of State remains a beacon of American statecraft and advocate of multilateral diplomacy. And she said she is concerned about US President Donald Trump’s recent actions to halt funding to the World Health Organization.

“I think it is the most counterproductive move he possibly could have made. Clearly, there were problems and problems the Chinese are going to have to answer for at some point,” Albright told The World. “But, having been at the UN, I can tell you there is no way to have your views taken seriously or call for reform if you’re not being supportive. And it’s definitely taking yourself out of a situation instead of really trying to deal with the problem. The UN is 75 years old. They do need some help in fixing these organizations, but we can’t do it from the outside.”

Albright spoke with The World’s Marco Werman about Trump’s recent WHO decision and the impact on multilateralism.

Marco Werman: What sort of reform do you think the WHO needs?

Sec. Madeleine Albright: The WHO did provide warnings, but I think that there are, obviously, issues in every organization about how they function internally, the bureaucratic aspects, their relationships. But we have to be at the table and we have to contribute and support it and not create additional problems by all of a sudden going around its back.

I don’t want to do an audit of the WHO in the middle of a pandemic. But specifically, where do you think the reform should happen?

The United Nations, many of the organizations, are actually very dependent on getting intelligence from the outside. And that’s probably a good idea to try to sort out when and how they get their information. But it’s unfair just to accuse them of having screwed everything up and blaming them for something that we need to take some responsibility for, and the Chinese obviously do.

Related: Madeleine Albright: ‘Many of the best diplomats are women’

So as far as Trump’s announcement regarding funding for the WHO, do you see it as theater and an effort to scapegoat? And what message does it send to the rest of the world?

I think that it sends a very difficult message that the United States doesn’t have to cooperate with international organizations. That the president of the United States can go to the General Assembly session and talk only about how important our country is and sovereignty without understanding that in the 21st century there are issues that can only be handled by more than one country.

And obviously, disease knows no borders. Globalization is not a four-letter word. It is the interconnectedness of the world in the 21st century. He has not explained, frankly, what he is going to do, where he’s going to put money. Or is he going to go through some other organization? Just kind of standing up and saying, “I’m canceling” or “I’m not going to contribute” without explaining what is going to happen, I think, is a grandstand.

Multilateral diplomacy is all but dead. So what comes next on the world stage, in terms of power relations?

Americans don’t like the word multilateralism. It has too many syllables and it ends in an “-ism.” But it’s just about partnership and a recognition that you need partners in solving problems. Trade and aid are obviously tools. But in order for us to have a good trade policy, which I believe we need to do, there need to be people that are healthy enough to buy our things.

I’m very worried about what I’m reading that’s happening in the developing world, where the virus is also hitting. They don’t have anywhere near the health situation that they can distance from each other. And who do we expect to buy all the things that we’re exporting? How are we going to deal with supply chains? So there’s an awful lot that’s interconnected that requires some kind of an active cooperation. Given what’s going on in the 21st century, we are interdependent. There’s just no question.

Sec. Albright, it’s no secret you’re known for wearing brooches that convey historical moments that you’re living through. Do you have a broach for this moment?

I do, actually. It’s a V, and I’ll tell you where it comes from. I do also write about the fact that — I was just a child — but we spent World War II in London during the Blitz. My father was with the Czechoslovak government in exile and he spoke over BBC to Czechoslovakia. And every BBC broadcast would begin with a kettle drum and the notes from Beethoven’s Fifth, which is basically Morse code for victory. And so I have a V pin. We need a victory over the virus.

This interview has been edited and condensed for clarity.

Tags:BBC Madeleine Albright Globalization US WHO