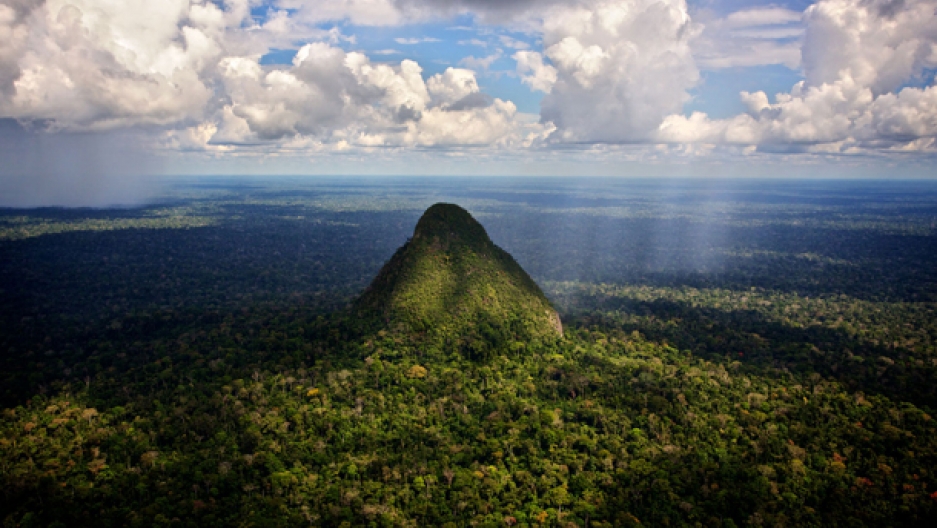 El Cono is a 1,500-foot inactive volcano in Sierra del Divisor, one of the most important national parks in Peru.

A judge in Peru has blocked a proposed oil drilling project in the Peruvian Amazon that threatened to damage the ecosystem and the health of isolated Indigenous peoples.

The Sierra del Divisor was set aside as a national park in 2016, but the national oil company, Perupetro, planned to exploit the area for oil extraction. An Indigenous coalition went to court to try to block the project, and they recently won the lawsuit. The suit was filed by the Regional Organization of Indigenous People of the East, or ORPIO.

Sierra del Divisor National Park covers a vast area of the Peru-Brazil border and is one of the most important protected areas in the country, said Beatriz Huertas, an anthropology consultant for Rainforest Foundation Norway.

“This region of the Amazonian rainforest is home to Indigenous groups living in voluntary isolation. … They decided to isolate themselves in order to keep safe from things like disease and aggression, which were brought forth by people exploiting the forest for latex.”

“This region of the Amazonian rainforest is home to Indigenous groups living in voluntary isolation,” Huertas said. “They decided to isolate themselves in order to keep safe from things like disease and aggression, which were brought forth by people exploiting the forest for latex.”

The national park also contains enormous biodiversity of mammals, primates and birds, and the fauna is extremely diverse and characteristic of the Amazonian region, Huertas said.

Related: ‘Our wealth is the forest’: Indigenous tribes are the last best hope for the Amazon

The area has already felt the impact of fossil fuel exploration, Huertas said. Reflection seismology studies, the clearing of forests for roadways and installation of heavy equipment have already begun in one section of Sierra del Divisor. And although Sierra del Divisor has as yet seen only exploration, not extraction, oil spills in the future are a real fear.

“In the northern part of the Peruvian jungle, the Selva Norte, oil spills happen all the time, causing a lot of contamination in the rivers, the land and the surrounding environment,” Huertas said. “The impacts are quite horrible, affecting the flora and the fauna in the forest, killing animals, plants and degrading water resources.”

Related: Saving the planet depends on saving its tropical forests. Can we do it?

An extremely sensitive area known as Lot 135, located on the edge of the River Yaquerana, is of particular concern. “It regulates the flow of the whole river,” Huertas said, “but that hasn’t been taken into consideration by the Peruvian government or considered important when it comes to making decisions about exploiting natural resources in the forest.”

Should petroleum extraction begin, the isolated Indigenous communities who live in the national park could face infection from diseases introduced by oil extraction company workers.

“That could result in a massive outbreak of deadly illnesses for Indigenous people,” Huertas said. “They don’t have the immunological defenses that people living in cities and talents have developed throughout the years. And degrading the forest for exploitation would basically damage their main source of subsistence. They don’t depend on mass-produced agriculture, like people in cities. They basically live off the land. … They depend exclusively on the forest and rivers in Sierra del Divisor to keep them alive. The health of the forest could be considered an indicator of their livelihood.”

Since the Indigenous groups living in isolation don’t have any social relationship to the Peruvian people, ORPIO, the Regional Organization of Indigenous People of the East, took on the responsibility of defending and protecting them, Huertas said. In 2016, ORPIO filed a lawsuit against the Peruvian government for violating the communities’ fundamental rights to health and subsistence. The judge handed down the verdict, which Huertas called “extremely favorable,” in December of 2019.

“It’s the first ruling of its kind in Peru,” she said. “The judge said that zoning for oil extraction in Sierra del Divisor must be changed to respect the areas inhabited by Indigenous groups in isolation, and that permits for oil extraction in these areas should never be granted again. It is creating favorable precedents for the rights of Indigenous groups in isolation [and] establishing respect for their subsistence and livelihood above money and economic interest.”

“But we also have to consider that this is the first ruling so far and that the defendants, in this case, have appealed,” Huertas said. “We have to work very hard and keep fighting in order to obtain the same verdict in the second ruling.”

This article is based on an interview by Bobby Bascomb that aired on Living on Earth from PRX.